Being awarded a badge

I am impressed that someone has gone to the trouble of having the mechanism of rewarding members with badges for all sorts of things - completing tasks, being diligent etc.
This is a positive thing that builds trust and respect
One badge I just received was for reading the guidlines for using this site.
I was surprised when the message said “Others with this badge (24)”
Surely, more than 24 people have read the guidelines.
Is it a good idea to have in an introduction for new members like me where all the badges are listed and what you have to do to achieve them?
Reading the guidelines should be the top of the list.

Badges are a standard feature of Discourse, the forum software we are using. You can find more details on the Discourse forum: 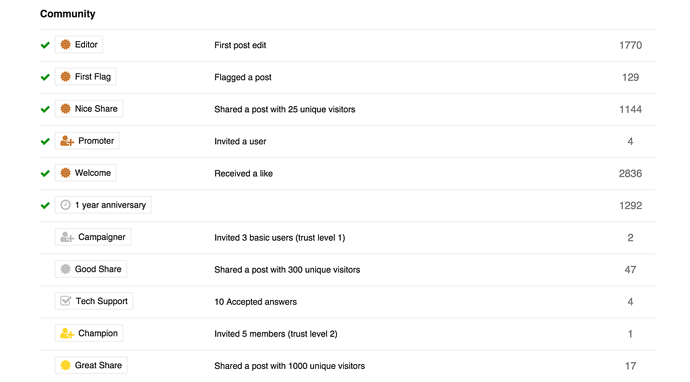 Badges in Discourse reinforce positive user behaviour and facilitates “learning by doing”. It is a central part of Discourse’s gamification features. Receiving Badges There are two ways to receive a badge: Manually granted by an administrative...

For an overview of all badges on our forum, see Badges.

We actually link to the Guidelines on several posts on the forum, most prominently on the Welcome to the Couchers.org Community post.

You can also find direct links to both Badges and Guidelines when expanding the hamburger menu on the right side of the top bar.

Surely, more than 24 people have read the guidelines.

I’m not so sure about that. About 10% would be a standard benchmark I guess… at the same time there’s indeed something wrong with our numbers, especially on the initial badges. Some are repeatedly reset. We’ll have to look into this, if it’s bug related to some update or sth wrong with our database.

Edit: So I followed up on that at the Discourse documentation and found that badges, that are related to posts (Like First Like, First Emoji,…) are only awarded on posts that are generally accessible on the forum. Generally accessible means that all users can interact on those posts, be it on a public forum or a generally private forum. On the Couchers forum, we now implemented a setup where some categories can be read publicly and others only by signed in members. So all these “member” posts are regarded as not generally accessible by Discourse and badges will be only awarded in the public categories.

I raised that as an issue on the Discourse forum. It’s certainly not a bug, but in my view a bad design. But I doubt it will get changed any time soon, because it would require a basic re-write of how badges are rewarded. So for the time being the badge system is only partly functional on our forum.

In any case, the Read Guidelines badge is not related to a post. So the count on that badge should be accurate

Is it possible to have a quick link on how to achieve badges on this page -https://community.couchers.org/badges For example, I have no idea how to edit, complete the interactive new user tutorial to become certified, and perhaps most importantly don’t know how to invite another person to become a member. Looking at the badges awarded, there has only been one share, no badges awarded for mentioning a user in a post, 5 people have read the guidelines in the last month and they are supposed to be easy to find, just seven people have received a like to get a welcome badge, nobody has mentioned a user in a post to get a first mention badge, nobody has a badge for quoting a post etc etc. I question what this discourse business is all about.