Displaying people on the map - city not shown

The map seems to hide the names of the cities that have any couchers registered. For example, in my screenshot the green dot is Moscow and the grey ones are just big cities, yet none of them named. And if you press on the person’s profile, location is also not mentioned in the info card, you have to go to the full profile.
Is this intentional? Seems not very convenient to me. 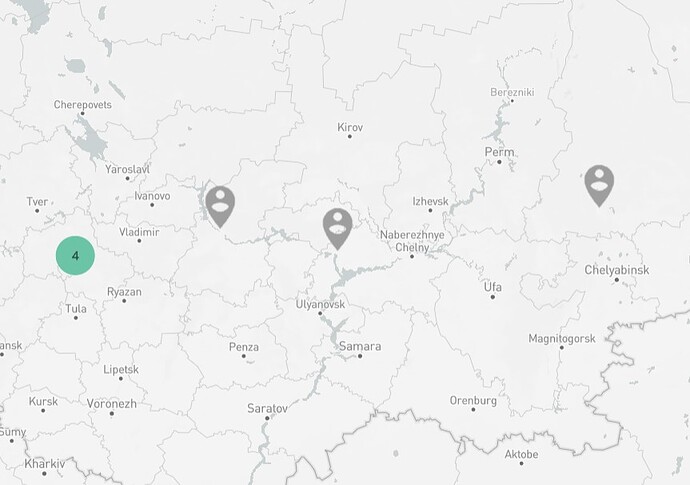 Also, just noticed that St. Petersburg couchers are included in the Finnish circle unless you zoom in. As in, it shows 0 people in St. Peter and 19 in Helsinki, while it’s actually 3 in St. Peter and 16 all over Finland. Is it possible to prevent such profile emigration?

I guess it must be happening in other places on the map too.

The hiding of city names is because the map tries to reduce clutter and will remove overlapping symbols. The pins take priority so that means city names must go! We should have a look at how to avoid that.

As for the clustering, that’s just because clustering is completely unaware of country boundaries: it just clusters users nearby depending on zoom levels so that you can see easier where people are.

Maybe just put the city name in the preview card then?

@aapeli I second the urge to put the city name on the preview card!! Yesterday I received a couch request from someone who was super nice, but I realized that they were looking for a host in Paris, even though I live in the USA. It seems like that user searched for “Paris” in the search bar (instead of using the location filter), and my profile showed up because I’ve listed “American in Paris” as one of my favorite musicals

I feel like if the city names were more prominent (perhaps City, Country or City, State/Province/Bundesland/whatever, Country) this wouldn’t have happened.

Same issue as Natalia.
When you search hosts in Prague, Czech Republic, I am one of the hosts that pops up even though I do not live in Prague anymore. I just mention on my profile that I used to live and host in Prague for couple of years. I haven’t received any request from a surfer looking for a Prague host but it might be just a matter of time. Not all surfers read profiles so when you show up in the host search in different location than listed, surfers can still send you a request without actually realizing that you live somewhere else.

Also, I noticed… There is one guy in my city that doesn’t show up on the map after my city search. It’s because instead of the city (San Diego) he chose to write just the neighborhood (La Jolla) as his location. To better understand where is the problem: it’s pretty much the same as you would be trying to find a host in London but the host stating that he lives in Notting Hill (district of London) wouldn’t show up on the map. Or when searching a host in Paris you wouldn’t be able to find a host stating that he lives in Odeon (a district in walking distance from Notre Dame). I don’t think surfers are searching all districts or neighborhoods separately. If I remember correctly CS had a specific format how to write your location but on Couchers I can see that you can type and display in whatever format you like so when hosts type just the district or neighborhood of the city, they unfortunately won’t show up in the city search.

If one is searching by location, they should open the filters menu and search by a location there, which will search by coordinate, not by the textual form. This has been discussed on the forum before as well, I recall, and why we chose to make the address a freeform descriptive field and force users to include a location.

I think this is a UX issue: it’s not obvious how to use the location filter (maybe put it as a bar under the current search bar). We should also probably not search by the freeform address so that it’s more obvious that you’re missing out people by using that.

We’re going to do another iteration of the Map Search in the near future, we will try to address a few of these things.

I agree aapeli, that would indeed be difficult to search by freeform address especially in bigger cities. Yet as a host I still have an option to choose my location based on my municipal part/neighborhood/district of my city rather than the city itself. My location will show in a format: municipal part, city, country where I then have an option to delete the city/country and display just my neighborhood which does not exist on its own.

I do not expect you to fix this, even google maps allow the same format and in the end it’s more about common sense of the host to display their location in the way that would be easy to find for their guests- choosing to write down the name of the city rather than one of XX districts. It was just interesting to see that when my fellow citizen chose to use just the neighborhood, he made himself invisible in our city search. The only way how to find him at the moment is to search the specific neighborhood (very unlikely, my current city has more than 100 neighborhoods) or zooming in the whole world map (which is the way how I found him).

I think this is a UX issue: it’s not obvious how to use the location filter (maybe put it as a bar under the current search bar).

That may work. I think it’s natural for surfers to assume that the visible search bar is for location. It’s pretty counterintuitive to use it for the name when you are looking for strangers in a certain location.

In CS it searched by location, and then you had a “keyword” field inside the filters that would search in the name and text of the profile, I think for the kind of social network it is (contacting strangers) that is what makes more sense.