Goals and direction of the forum

On the last Weekly Online Event we spoke a bit more about having a public forum or not. I found the most helpful approach was to ask What’s the goal of having a public forum? But then it quickly touches on the more general question: What are our goals with the forum overall?

Because goals change and running a forum is far from having a free lunch. It’s actually rather expensive in terms of moderation. So it’s important to continuously assess the goals and weigh what’s worth the effort. Here’s some goals I see right now:

So far we have this covered with the #features category. As the app becomes more usable, we can extend this more towards collecting Feedback and bugs. When the app becomes more widely adopted and used, we will need some sort of Support channel. It can be helpful to have this openly accessible, rather than responding individually to user requests. This way we could provide a space for user-to-user support and also attract more help in expanding support issues into How-tos or FAQs.

Exchange ideas about the project

That’s what we have going right now. I think it’s very important at the moment, but might become less useful as the project advances. It will also become more costly to maintain when member numbers rise, probably too much so to be worth the maintenance as a generally open forum.

I think it’s important for any volunteer projects to generally inspire collaboration and offer easy access paths to get involved. This can be a space for all members that don’t want to be active as volunteers, but nevertheless want to get involved with other members and work together on small or big projects, that are not relevant to the core project. I think this can be a great way to cultivate and add to a culture of collaboration.

That’s just some purposes I see, which raises another aspect: What can be regarded as a good purpose largely depends on if there are members that are passionate about it and eager to build and maintain it. We could actually embrace this and move towards a much more modular setup with the forum. For example I’m not too enthusiastic about caring to maintain a general purpose discussion forum in the long run. But maybe there are others that see great value in it and are ready to put in the work it will take. I’d be very enthusiastic about offering a low-barrier collaborative space though.

So I sketched a modular setup that can look similar to this: 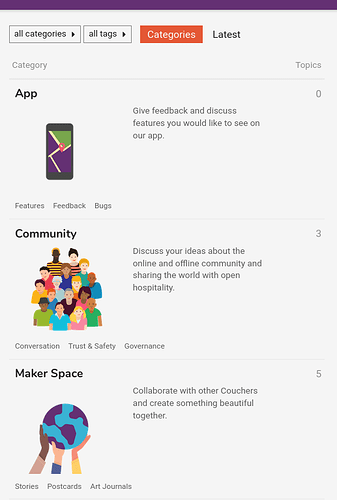 So we have devs and members interested in app support that want to connect with users in a forum setup? Let them run an app section! People that want to maintain a general purpose forum? Go ahead! Members passionate about a Maker Space? Let’s do it then! No one’s taking care of a specific section anymore? We can pack it up and archive it, rather than watching it become dysfunctional.

This approach would also enable us to move away from global moderation (which I see difficult to maintain in the long run). Members running a specific section will be responsible for it’s moderation and the rules of engagement. So moderation would rather look somewhat like this:

Well, just some ideas so far. Thanks for reading! And thanks for sharing yours

2 Likes
Promote your own country/place on couchers.org
Changes to the forum during the Couchers.org Beta
pelgrim December 5, 2020, 1:02pm #2

I like the thorn tree from the lonely planet website.
If a part of our forum could be dedicated to that …

If a part of our forum could be dedicated to that …

then you’d love to set up and maintain this part?

Regardless if I would,
if we’re all will have to set up and maintain our ideas no much people will be encouraged anymore to bring them up in the first place.

But point taken of course.

Yes, sorry… just couldn’t resist picking it up like that. No general point intended in fact, the overall idea of the forum is to share ideas!!