Hello! I got my very first (copy and paste) request. I ended up declining it which automatically blocked the whole conversation. It says: “this host request is closed or in the past. To continue chatting, add the other person as a friend and send them a message”.

In my experience from CouchSurfing a lot of people like to reply “Thanks anyway” or ask for recommendations, maybe ask to meet up etc… but now it basically looks like I blocked the dude.

I would welcome if the window stayed open just like on CouchSurfing. I personally don’t feel like I want to add random people to my friend list in order to be able to write something back.

Later we are going to redo the requests to combine it better with messaging so you don’t have the be friends. Until then, do you think it would be enough to just have a message confirming the rejection? Like: “Are you sure you want to reject this request without a message? You won’t be able to send another message after unless you are friends.”

Then can send a message with the rejection or before it.

Thank you Lucas! I only used search bar here!

If the current settings block the conversation, it would be good to let the host know before they click that reject button (“You won’t be able to message each other unless you are friends.”) I haven’t got any warning and I was unaware of blocking the conversation when I was rejecting the request.

I mean it’s amazing tool to deal with copy and paste requests when you do not need to hear back from certain people but you took away the opportunity to stay civil.

I like the concept of two buttons that are currently on Couchers: Accept/Reject. It’s good to turn the request down so the person knows straight away what you can or can’t do for them but I think it’s unnecessary to block the conversation. I have hosted on CS for eight years and haven’t felt a need to block a single person that I rejected.

It would be good to hear what fellow hosts think of this “Reject=Block” button.

Something else I would like to add. I think that people should be able to message people who are not their friends not just thru a request. On other hospex sites I have had people just message wanting to meetup in my city and we did meetup. Also I have messaged people with questions about events. Also I asked a question in a city forum and several people sent me direct messages answering my questions …we then talk a bit there and I met up with 2 of them in their city.

I messaged Emily with questions about event promotion and I had to send her a friend request before I could even send her a message.

I know that oftentimes people can get these weird spam like creepy messages. Maybe once the site gets bigger we could have someone who overseas messages for a 12 hour period and it could be done on a signup basis for periods of the full year. Personally I would be more than happy to this for 12 hours. If someone gets a creepy message they would report it immediately and then who ever is on duty could suspend the account. They would almost be like a bouncer per se. Anyone who got suspended could appeal to the dedicated trust and safety person in an attempt to eliminate favoritism or things like that.

On other hospex sites I have had people just message wanting to meetup in my city and we did meetup. Also I have messaged people with questions about events.

I’m really glad you brought up these important use cases! You will have the ability to send people a “meet up request” or a “hosting request” so if you just want to meet up or hang out then you can send the “meet up request”.

Likewise, if you join an event, you will be able to message the organizer. One thing I’m not sure about: Should all attendees of an event be able to send a message to anyone else who joined the event? My main concern is big events (with a hundred or more people); Would you be okay with anyone at that event messaging you directly (even that creepy guy or gal at the event that no one liked?!)

The other thing I was thinking is that sometimes people may want to organize events with other members they see are active in their city or share a common interest in. I think these are genuine things to be considered as well in messaging.

I also think we should change the mechanics around being able to initiate new chats, as basing it on being friends has several downsides:

How about just adding a general “Contact” option (alongside the “Request” options). So when you send a first time message to someone, it is presented similar like the requests. It could also have some reminder note and a few checks (like minimal word count, blocked words…) and recipients could have an easy way to block/reject/report abuse. Something like this:

Or just have one “Connect” button, that expands to several options (Request to stay/Invite to hangout/Write a message)

I just wanted to say that I also find the current situation very much restrictive. I assume it’s not impossible to just have a possibility to block a person? Then if smb does receive a disturbing message, they could use it. But I don’t see why people should be not allowed to send messages to strangers at all.

Also, as it was already said, with this system there will be spam friend requests instead of spam messages. I actually had those even on CS for I don’t know what reason (like some random people, somehow usually from India, sending friend requests but never writing or anything), but I can’t remember getting a single inappropriate message.

Also, I assume there’s no ‘maybe’ button to answer the requests here? I was using that a lot, usually for situations when I’m pretty busy and will be only available for a short time, but can still host if the person is ok with that.

The requests module is being worked on right now as it does not currently match the intended design. You will be able to respond with “maybe” and also change your response prior to the start date (for example, if you say “maybe” initially, but after talking to your roommates you have to say “no”). Also, if you respond no, you won’t be “blocking” the person. You can still message with them.

That’s great to know! Thanks you

I have hosted on CS for eight years and haven’t felt a need to block a single person that I rejected.

I agree with this. In the 15 years I’ve used CS I never once had to block someone.

As a side note related to the discussion, I regularly go through “Public Trips” on CS and send messages to people with incomplete profiles to give them tips about filling it in and what the community is about. I even give them tips about other hosters or some things to do in my city, as it’s often really tricky for people here (especially around holidays) to find hosters. Without the ability of communication, it’s really hard to build a culture or values in a community.

Hey guys, I just got an admittely very rude request (in the likes of “hey, can I stay with you from x to y” without giving information of the motivation behind the stay in my town and not even writing anything personal) that I would like to decline, but this will cut me off from talking to that person. People are new to this site and hospex and might still want to learn from why I declined (even if I put my reasons up there, they might have some questions after that) but once I decline this option vanishes (unless I send a friend request - not very likely).
The problem is until I formally decline the request the person can still try to negotiate (or be in the unclear) if I will host them or not.

I guess a better option would be to not cancel the conversation thread once you decline but have a button for both persons in the likes of “I had enough” (or something less passive-aggressive) that will manually terminate the conversation but independently of the accept/reject situation.

Hi Niklas! @n.spark and I ran into similar issues. Thank you for bringing this up! I know there are definitely plans to fix this so that it is possible to reply to people even if you decline. This change along with the ability to message anyone will hopefully be coming soon.

Until then, what I’ve been doing is I communicate with the person before clicking “accept” or “decline”. In one case after I got a very low-quality request I messaged with the guy a bit and he actually filled out his entire profile, uploaded a photo, and sent a much more thoughtful request! We ended up hosting him and he was one of the nicest, most friendly couch surfers I’ve hosted! He was brand new to couch surfing and was super excited to try it out. It reminded me a bit of how I got started on couch surfing!

oh thanks for the fast reply, didn’t know there was actually a practially identical topic created

yeah, I made a similar experience on Couch Surfing where I hosted someone I initially rejected. good times!

This might be a different issue, but I will raise it here to see.

I got a last minute/day of couch request. I did not check my email, so did not get the message until AFTER the request is stale - the day after the requested stay. I can neither Accept or Reject because the request is closed or in the past.

I’d like to say I am sorry, but I cannot, and I cannot clear this pending request.

This will be aggravating because I will appear to be unresponsive when I did not get a chance to respond.

Is there any way to qualify the timeliness AND responsiveness?

Let me know if it would help to start a new discussion. 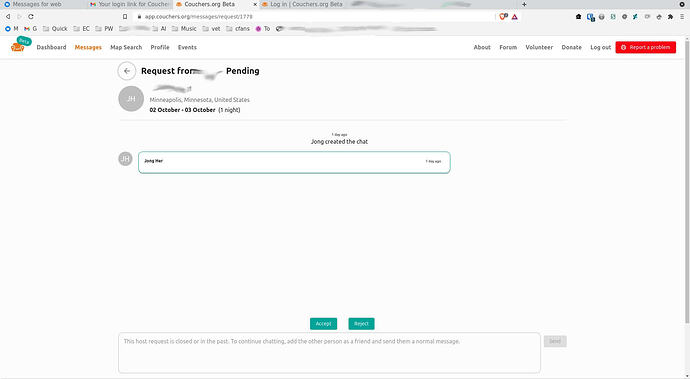 Hi Wylbur! This is a similar problem caused by a related issue. This type of situation will be taken into consideration when we redo the messaging and requests functionality so that you will be able to message the person even if the request has expired. Thank you for bearing with us while our dev team works on improving these features!

The matter of responsiveness is a topic up for discussion: We do plan on displaying a “response rate” metric (in percent) on profiles to show how responsive someone is to requests. But what should be considered a timely response?

what should be considered a timely response?

3.5. Anytime before, during, or 48 hours after the request window ends

Two days seems reasonable to me.