Hey @prino - Thanks for your feedback!

As for messages - that is definitely one of the many design changes we plan to implement in the future. Here is a preview of the model that we hope to implement later on. 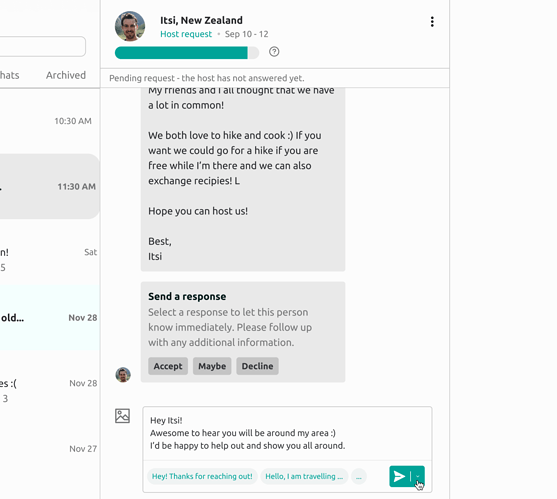 Times - That is a good point. Perhaps we should allow users to toggle their settings? Giving users the opportunity to choose between 24 hours vs. AM/PM?

If the reply is the “Hey Itsi!” part, it’s still a tiny box…

And as for the times, there is a perfectly good standard, ISO8601. Don’t complicate matters by offering toggles, keep your coding simple, and drag those 18 countries into the 21st century!

@prino What are your favorite message interfaces? We will definitely keep them in mind moving forward!

The one I’m now using to reply here on the forum is better than the one to initiate a conversation, but it still isn’t resizable in height, and I don’t really need to have the same text appear next to it in a formatted way, taking up the other half of the screen. For that a “Preview” function would be useful. Try to add some media detect code, I have a smartphone, but almost 100% of the sites that need input are accessed via a laptop with a full HD screen. I absolutely hate the tiny phone screens and on-screen keyboards.

but it still isn’t resizable in height

You can resize the composer panel here on the forum. Just move the cursor over the teal-colored top border and then click and drag it up or down:

If you click the icon on the upper right corner of the panel you can also enter a full-screen mode.

That is a good point. Perhaps we should allow users to toggle their settings? Giving users the opportunity to choose between 24 hours vs. AM/PM?

Don’t complicate matters by offering toggles, keep your coding simple, and drag those 18 countries into the 21st century!

While I’m with you in spirit

, I think it would be a mistake to force users to use 24 hour time. A user-specific toggle is an easy and common way to handle this issue.

I really dislike it when I get requests telling me “I expect to arrive at about 4pm”, and although that’s something you cannot change, using 24 hour times throughout the site may make people think about using that themselves!